A Texas Native Competes For Japan At The Tokyo Olympics

Ira Brown of Team Japan looks on during the Men’s Pool Round match between Latvia and Japan on Sunday at the Tokyo 2020 Olympic Games. “It’s an honor to be Japanese,” he said. 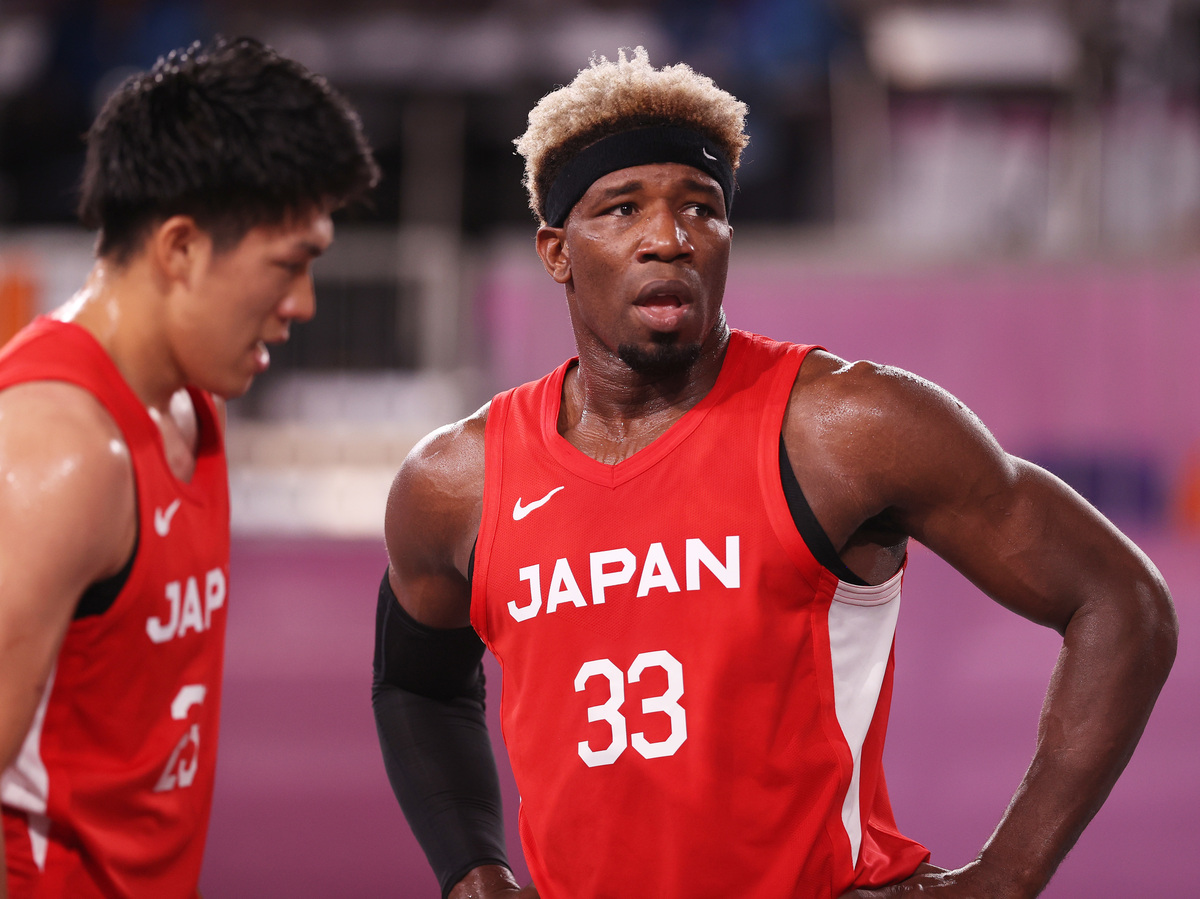 Ira Brown of Team Japan looks on during the Men’s Pool Round match between Latvia and Japan on Sunday at the Tokyo 2020 Olympic Games. “It’s an honor to be Japanese,” he said.

His three pointers got him the nickname. For years he’s played professional basketball in Japan. But he never dreamed he’d get to the Olympic stage.

“Not in a million years,” he said, shaking his head and laughing.

Let alone playing for his adopted country, in a sport that debuted at the Olympics for the first time in Tokyo. Three-on-three basketball is a ten-minute game. Three players on each team compete to 21 or to whichever team has the most points at the ten minute mark. It’s a lot like the pick up games you’d play in your driveway.

Brown grew up in Corsicana, Texas. Population just under 24,000. He got his athletic prowess from his parents.

“My dad was a football player and my mom was really, really, really good at softball. I mean, my mom could have done anything,” he said.

But they struggled with addiction. His grandmother took care of him, his siblings and many of his cousins.

A tough childhood with dreams of being a millionaire

“So it was about 15 to 17 people living in a three bedroom home,” he said. “We would have to pretty much all to try to sleep in one bed. And eventually I made a little small closet in my room that had like a little lock and key that I would lock my stuff in.”

Ira Brown of Team Japan drives to the basket in the 3×3 Basketball competition on Tuesday at the Tokyo 2020 Olympic Games.

She worked hard to give them all they needed.

“She was an absolute warrior with what she had. But I mean, she was just a one-woman wrecking crew,” he said.

To make a little money, he and his sister used a stick to knock pecans out of trees, then sold them to local grocery stores. He was about ten. They’d collect cans and sometimes stuff candy into their jacket pockets at local convenience stores then hawk the treats at school to other kids.

“It was just a struggle to live because often times we just didn’t have water, sometimes we didn’t have electricity,” he said.

So a thirst for stability and safety bubbled inside him. As a child he didn’t have aspirations of basketball stardom. He dreamt of the wealth he didn’t have.

“I always told myself I want to be the first millionaire in my family,” he said. “That was always my driving motivation.”

A way out thanks to sports

And sports became his path. At first it was baseball. His first love. It was a sport that brought him to his adoptive parents, both baseball coaches.

At 18 he got drafted into the minor leagues. When he didn’t get to the majors he went on to play Basketball at Gonzaga University in Spokane Washington. He was inspired to go to college by his older brother, the first person in his family to graduate from university.

Basketball, showed him the world: Mexico, Argentina, the Philippines and finally Japan. It was here he says, he felt like he’d found the safety he’d been searching for.

“I didn’t want to go anywhere else in the world,” he said. “Japan was pretty much home for me. So I’ve stayed over here since.”

He married, naturalized and later divorced. He currently plays for the Osaka Evessa, a basketball team playing in the B league, the top tier professional basketball league in Japan.

“It’s an honor to be Japanese,” he said.

And this year the Japanese Olympic Team, including Brown, is redefining what it means to be Japanese. Sparking conversations about race and identity. Among the Japanese Olympians is tennis star Naomi Osaka. She’s a mixed-race Japanese icon and the face of the Tokyo Games who lit the cauldron during the opening ceremony. Her image graces posters across the capital with the word “new” in English and “generation” or “world” in Japanese.

“I feel like we’re breaking barriers especially with how they treat mixed kids before, especially when I first got over here,” Brown said. “Then Naomi Osaka and Rui started having a lot of success and all of a sudden the narrative started changing.”

On Wednesday, Latvia took the Gold in men’s 3-on-3 basketball. Japan’s team, assembled just three days before the Games, didn’t make it past the quarterfinals.

“To be honest with you, I just enjoyed the experience, winning or losing,” he said. “Knowing that I gave it my all and I came up short. I’m OK with that.”

Ira Brown of Team Japan slam dunks during the Men’s Pool Round match between Japan and Netherlands on Sunday during the Tokyo 2020 Olympic Games at Aomi Urban Sports Park. 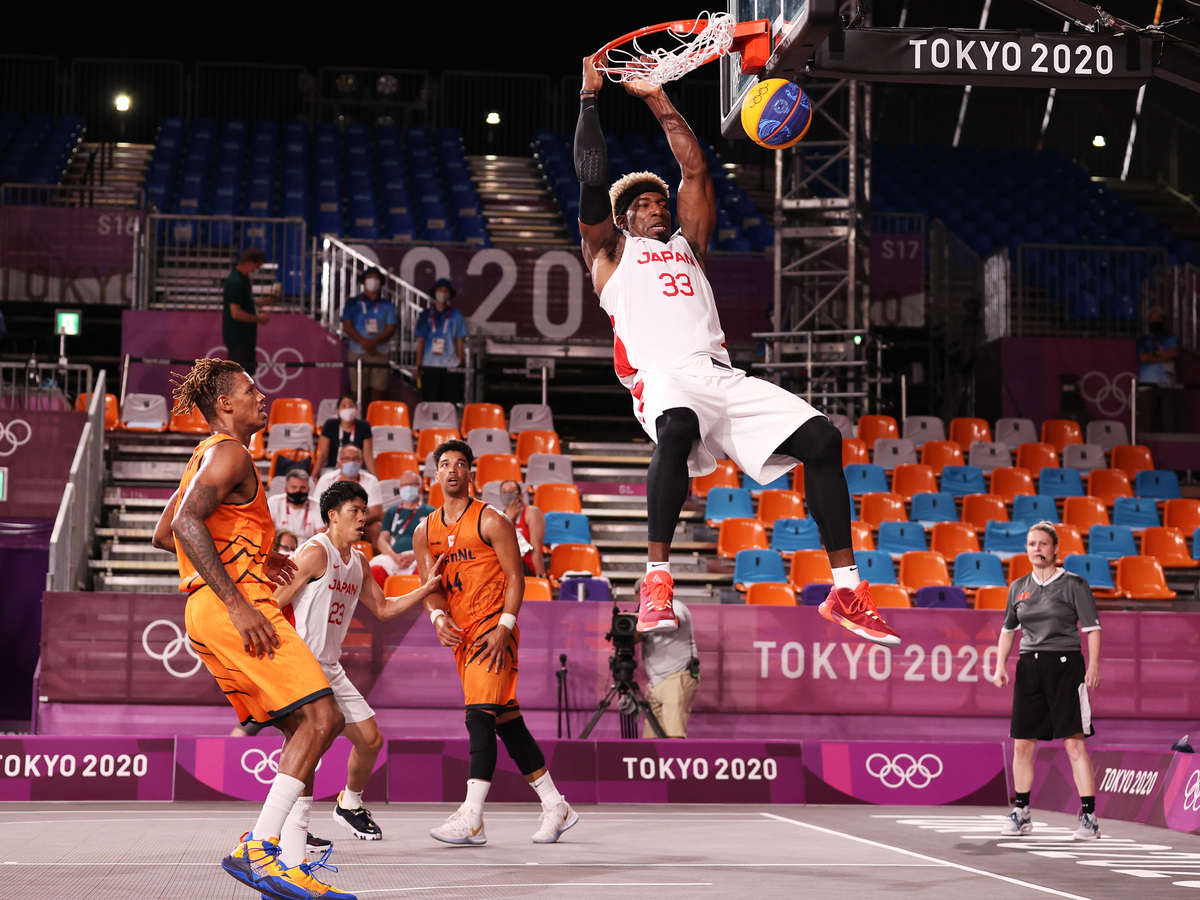 Ira Brown of Team Japan slam dunks during the Men’s Pool Round match between Japan and Netherlands on Sunday during the Tokyo 2020 Olympic Games at Aomi Urban Sports Park.