Biden Has Sent Millions Of Vaccines To Nations In Need. Millions More Are Needed

Containers of Moderna vaccines donated by the U.S. arrived in Bogota, Colombia, on July 25. 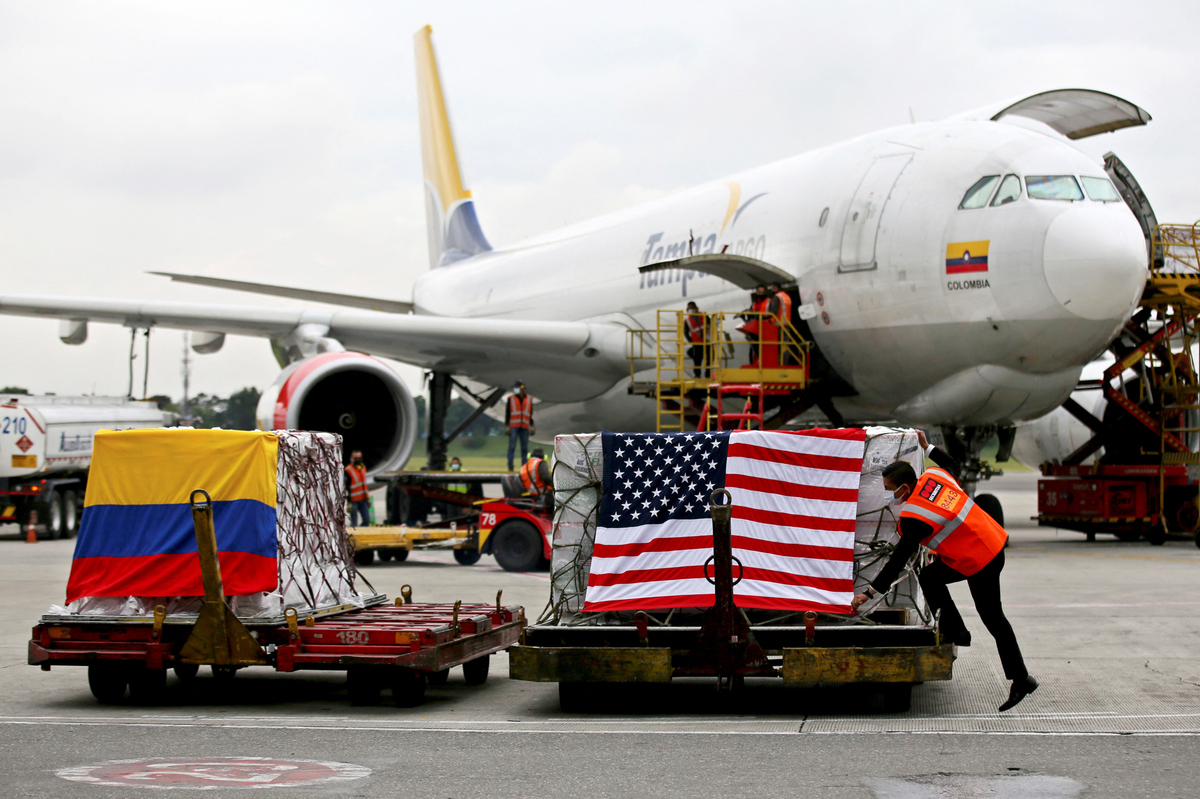 Containers of Moderna vaccines donated by the U.S. arrived in Bogota, Colombia, on July 25.

The U.S. is on track to deliver 110 million COVID-19 vaccine doses to more than 50 countries from Afghanistan to Zambia, two officials told NPR — a milestone that President Biden is expected to formally announce at the White House on Tuesday.

But these initial U.S. donated doses are just a first step for the projected 11 billion vaccines needed to vaccinate 70% of the world’s population and bring the pandemic under control, according to the World Health Organization.

And providing doses to other countries is a quasi-Herculean task. “Sharing vaccine doses isn’t quite as easy as just putting them on a plane and calling somebody at the other end and telling them when they’ll arrive,” says Gayle Smith, the global COVID-19 response coordinator at the State Department.

There have been some delays. Biden first announced that the U.S. would distribute 80 million doses to countries in need by the end of June, only to later say the goal had simply been to “allocate” them by the end of June.

Legal and regulatory hurdles loom for such sophisticated medical goods, Smith explains — both for the U.S. to export them and for countries to receive them. And it’s an urgent matter: Doses must be distributed before their expiration date, with cold chains set up to keep them from spoiling. Solutions have to be devised country by country, sometimes with elaborate legal agreements.

On this global stage, the Biden administration can’t call all the shots. “In some countries, it’s actually required … to take new laws to their parliaments so they can accept these vaccines, so it’s a complicated logistical exercise, but I think we’ve shown it’s entirely doable,” Smith said in an interview with NPR.

These first 100 million deliveries reflect Biden’s effort to establish the U.S. as “the world’s arsenal of vaccines” and are essentially a warmup for the hundreds of millions of shots that the U.S. has pledged to deliver later this year and next year.

The number of doses delivered so far puts the U.S. ahead of every other country making donations, but the pace of the shipments is much slower than it should be, says Dr. Krishna Udayakumar, founding director of the Duke Global Health Innovation Center.

And certain parts of the world are severely lacking in vaccines. The breakdown of distribution at this point illustrates how far many countries are from any meaningful level of protection. Worldwide, fewer than 1% of vaccines have gone to people in low-income countries, while more than 80% have been given to people in high- and upper middle-income countries.

It’s great to see the US leading & sending more vaccines to Africa, which is grappling with a deadly third wave. It’s imperative that wealthy nations continue sharing more doses with Africa, where less than 2% of the population is fully vaccinated. https://t.co/W6nlEiWhpA

As the highly contagious delta variant surges, global health experts are calling for a bigger investment in the pandemic response.

“Right now, it doesn’t seem like the effort is matching the level of crisis that some parts of the world are seeing,” says Jenny Ottenhoff, senior policy director for global health at the ONE Campaign.

The speed with which those doses arrive could determine the trajectory of the pandemic — and how many more people will die.

The numbers are daunting. At least 800,000 COVID fatalities are projected in the next two months, according to new estimates from the Institute for Health Metrics and Evaluation at the University of Washington.

In an open letter released on Tuesday, a group of prominent global health experts write that the Biden administration and its G-7 allies have “taken important but modest steps to close the global vaccine gap,” which still “fall far short of the true scale and urgency required.”

The letter urges the White House to quickly ramp up U.S. donations by at least 1 billion doses by mid-2022, strengthen global coordination of vaccine supply chains and pour resources into ensuring that “doses are translated into vaccinations.”

A man walks past donated Johnson & Johnson vaccines after their arrival at the Phnom Penh International Airport in Cambodia on July 30 — the first batch of 1 million shots. 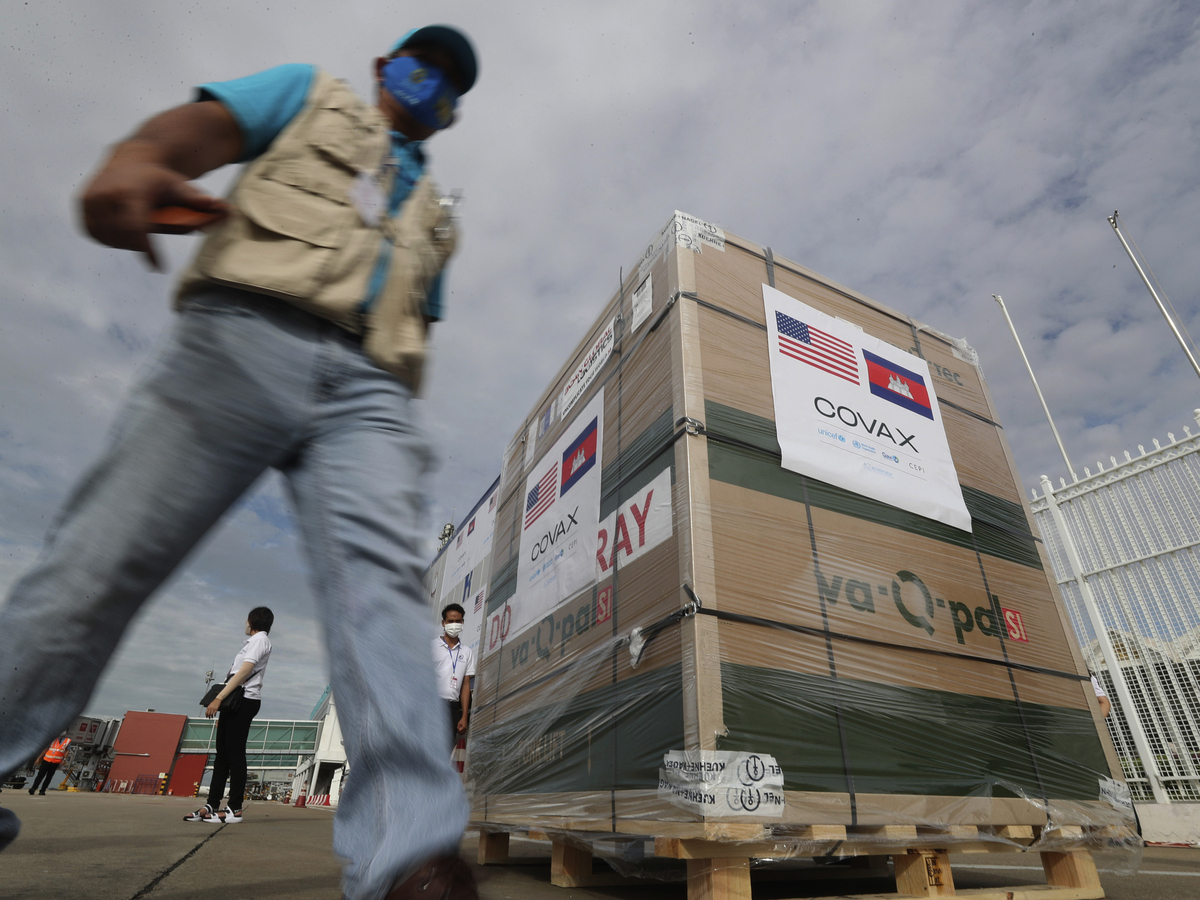 A man walks past donated Johnson & Johnson vaccines after their arrival at the Phnom Penh International Airport in Cambodia on July 30 — the first batch of 1 million shots.

As the Biden administration prepares to move hundreds of millions of more doses, the challenges in delivering these first 100 million doses should serve as a wake-up call, says Prashant Yadav, a senior fellow at the Center for Global Development who studies health care supply chains.

“Just having surplus doses and a plan on how to allocate them is not sufficient. It requires a lot of other things to fall in place,” says Yadav. “Similar types of logistical challenges will remain in place for that massive quantity. And so the bigger question is, are we now planning based on what we’ve learned?”

In July, the White House released a “framework” for the global pandemic response, but the Biden administration still seems to lack the kind of “superstructure” needed to manage the complex demands of the global vaccination campaign, says Stephen Morrison at the Center for Strategic and International Studies, who also signed the letter.

“It’s been somewhat ad hoc,” he says. “We need to be staffed up at a higher level with a command-type approach similar to what we’ve taken domestically, and we don’t have that yet.”

The U.S. has the opportunity to take on a “more engaged” role with the global vaccination rollout, says Yadav. But that would require a much larger investment in the federal agencies currently orchestrating the vaccine-sharing programs, he said.

A health worker vaccinates a woman in Thimpu, Bhutan on July 26. 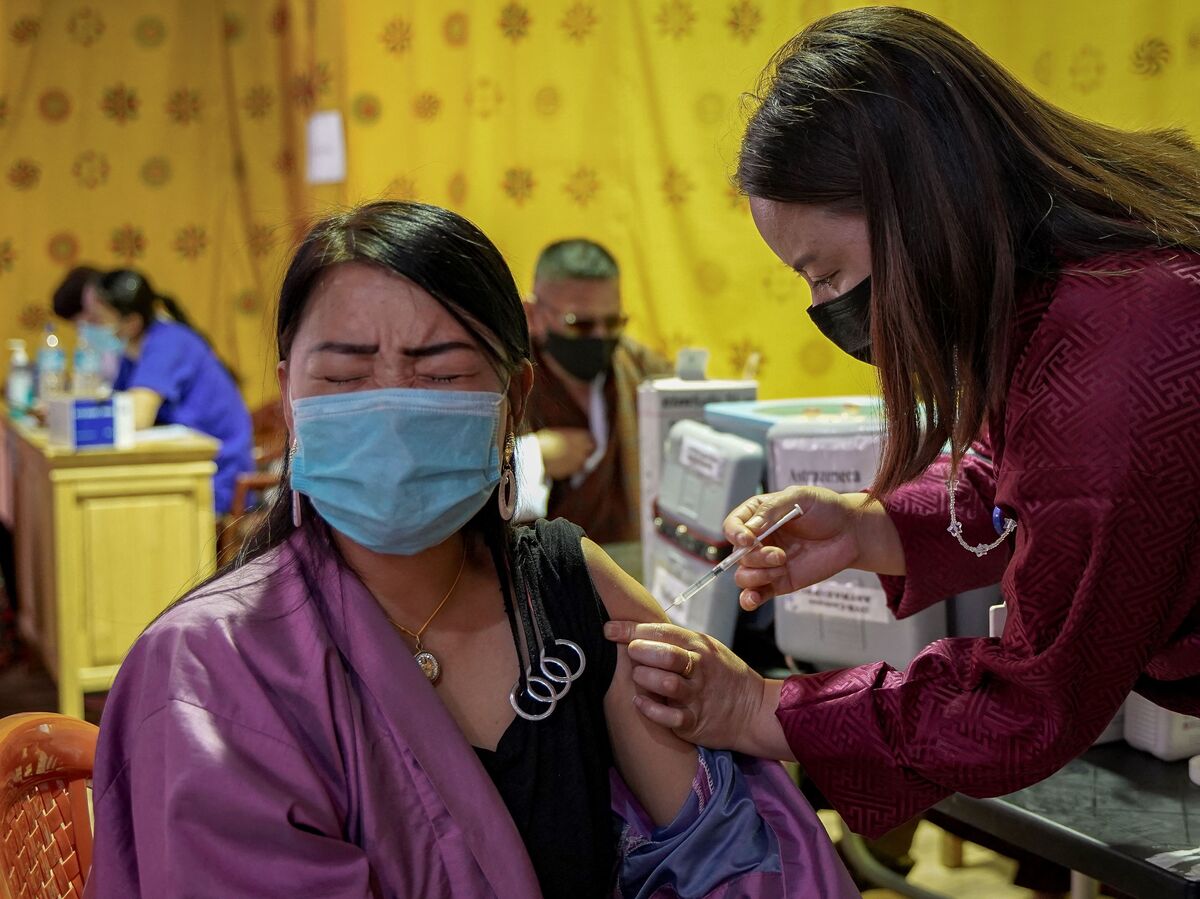 A health worker vaccinates a woman in Thimpu, Bhutan on July 26.

Biden is expected to talk about coming plans to boost shipments. The U.S. announced earlier this year that it secured 500 million Pfizer doses to distribute to poorer countries. That distribution is beginning in earnest this month. Smith says the aim is to “accelerate, accelerate, accelerate” to get more vaccines to more people faster.

“I don’t want to understate in any way how proud all of us are that we not only hit the 80 million but we are at 110,” says Smith. “But I think none of us thinks that we can check the box now. There’s still a massive amount to do. This last quarter of 2021 is critical. So we’ve got to keep going, and we’ve got to do more in any possible way we can do it.”

As long as the virus is moving faster than the drive to vaccinate the world, it is winning, she says.

And that puts more pressure on the Biden administration. “Without U.S. leadership, I don’t see another plausible pathway where we’re going to turn the corner on this pandemic any time in the next six, 12 or 18 months,” says Udayakumar.